Jim Sprague: Proposal 3 is “dangerous and far-reaching.”The U.S. Supreme Court’s ruling in June to overturn Roe v. Wade has
unleashed a seismic stir to action in the pro-life camp.

Sen. Lindsey Graham’s (R-South Carolina) has introduced a bill that would
ban abortions nationwide after 15 weeks of pregnancy.

Closer to home, the Michigan Supreme Court has approved putting Proposal
3 on the November 8 ballot, which would enshrine abortion in the state
constitution if voters adopt it. Such a law would be a 180-degree turn from a
1931 law that banned abortion, except to save the life of the mother. Michigan
Court of Claims Judge Elizabeth Gleicher ruled however the Michigan
Constitution&#39;s due process clause is expansive enough to cover reproductive
rights and thus blocked that law.

Whether through countryside or in cities, the Camino de Santiago is a demanding pilgrimage.Amy Wiseman's customer service job drained her, especially during the pandemic. "If there's anything that can douse your faith in humanity, it's seeing the worst in people," recalled the Grand Rapids woman.

Her own business start-up had added to her burden and kept her busy seven days a week. "I had no balance, wasn't happy in my work and was burned out," she sighed.

West Michigan’s concert schedule for the remainder of 2022 offers a full range of national music artists heading to the area. And already there’s a bevy of Christmas concerts lined up for the holiday season.

Here are a few of the offerings:

Dégagé Ministries in the Heartside neighborhood that is for homeless people, recently opened its first completed section of its renovated campus. The $7.5 million "Building Dignity Through Christ" capital campaign is at the Northwest corner of Sheldon Boulevard and Cherry Street in downtown Grand Rapids.
The first phase includes:

• Relocating the organization's main entrance away from the congested Cherry/Division corridor to the more pedestrian-friendly Cherry/Sheldon intersection.
• An expanded dining room to serve 90,000 meals a year (50% increase in capacity, from 120 to 180 seats).

Over the course of one month, the Footwear Depot raised this money by offering a discount to any shopper who made a $5.00 donation. One shopper at a time added up to a generous gift that will help cover the operating costs for the recently opened men's home. 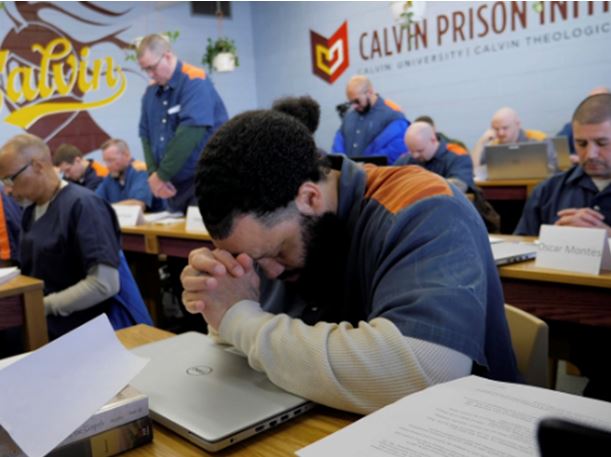 The Calvin Prison Initiative, a partnership between Calvin University, Calvin Theological Seminary and the Michigan Department of Corrections, recently graduated 40 inmates who received bachelor's degrees while behind bars.

The first three graduating classes (Class of 2020, 2021, and 2022) from the Calvin Prison Initiative program received their bachelor's degrees during a commencement ceremony held inside the confines of Handlon Correctional Facility, in Ionia. The ceremony included those who received their associate degrees, the first-of-its-kind in the state of Michigan.

Guiding Light has promoted Brian Elve as its new executive director. Formerly
the Recovery program director, Elve will lead a team of 26 and set the strategy
and direction for the nonprofit organization in his new role. As executive director,
he will be responsible for the operational effectiveness, financial stability,
fundraising initiatives and the overall success of the organization.

Chris Preuss has been tapped as the next executive director and president of Norton Shores-based Maranatha Bible and Missionary Conference. Preuss spent most of his career with General Motors where he served as their global vice president of communications. He also served as the chief marketing and communications officer of Aptiv (formerly Delphi) and most recently led a business network of agency brands that supported the Ford Motor Company around the world.

Esther Fifelski: “I do see this as God’s work.”Tourists exploring countries they've never been to take pleasure in encountering people and cultures unlike their own. But for refugees fleeing their homelands, traveling internationally is often an unsettling experience.

Such is the case for Afghans fleeing their motherland. They arrive in the United States traumatized and confused, often carrying with them all they own in a suitcase.

And now with the war between Russia and Ukraine, another wave of refugees will likely arrive in West Michigan.

With the Taliban retaking control of Afghanistan, people are being forced at a record pace to flee their country. As the U.S. armed forces rapidly withdraw from Afghanistan, more than 18,000 Afghans who served alongside the United States are in grave danger and at risk of retaliatory attacks from the Taliban.

Zach WilliamsTwo major Christian concert tours are coming to West Michigan this fall and are scheduled in the same venue.

The country-style Williams has proven to be a popular concert and Christian radio attraction, and performed last fall in the Mercy Health Center in Muskegon. In 2020 he won a Dove Award as Artist/Songwriter of the year. His best-known songs include "Chain Breaker" and "Rescue Story."

Singer Denise Frye was raised on music of the church.

"My brothers, sister and I sang in a family gospel group," said the Grand Rapids woman of her legacy with the vocal ensemble Wings of Faith.

Now at the upcoming Festival of the Arts, Denise will be featuring her solo vocals with a performance at 4pm Saturday June 4 on the Fountain Stage downtown as part of the annual city festival.

"I didn't want to live anymore, but I knew I could never end it because I had too many responsibilities," recalled the Zeeland woman of her feelings around five years ago.

"I felt trapped in a world I didn't want to live in."

But through counseling, prayer journaling and supportive relationships, the 37-year old married mother of three has rebounded with a new outlook. Tiffany is exercising her gifts, helping to lead worship at her church and has resumed her promising songwriting.

"I really have a heart to reach out to people who may be going through the same experience and offer a word of hope," she said.