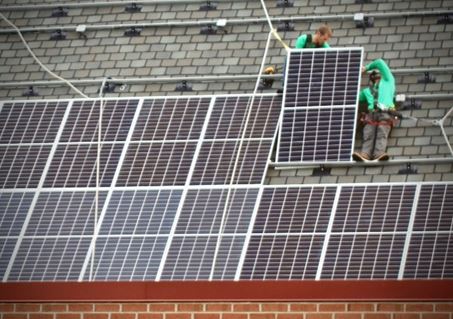 In July, Calvin Christian Reformed Church in Grand Rapids installed 126 solar panels on its roof as it switched to renewable energy.

The project is expected to keep 5.4 million pounds of CO2 out of the atmosphere - the equivalent of 7.4 American homes being taken off the grid or the carbon sequestered by 3,000 acres of forest in a year, explained Nate Dierlam, a church member who spearheaded the project.

"As Christians we are called to be stewards," said Dierlam, who is a member of the building and grounds committee at CCRC who brought the proposal before the leadership team early this year. "This array lowers our carbon emissions and supports our calling to respect God's creation and address climate change."

The church is expected to offset 38 percent of its electrical use annually allowing them to redirect funds to missions and outreach.
Author Information
Author: Paul R. KopenkoskeyWebsite:
About:
Paul R. Kopenkoskey is a full-time freelance writer and editor for an assortment of publications including Grand Rapids Magazine, Grand Rapids Business Journal, and Faith Grand Rapids magazine. He has completed his first novel with the working title, Karl Beguiled. He and his wife, Barb, live in Wyoming, Michigan. They have three children and five grandchildren.