Mike “Brickhouse” Benson starts to give a steel rod a new shape.Mike "Brickhouse" Benson grabs hold of a steel rod and does something with it he calls the Tylenol Bend. The feat gets its name because it's a sure-fire way to trigger a headache.

Wrapping a cloth around the rod's center, Benson places it on his head and with the sheer strength of his massive biceps, bends it into a U shape.

Applause and shrieks of amazement arise in the cafeteria at Discovery Elementary School in Kentwood where around 400 kindergarten to 5th graders are gathered to witness feats of strength at a recent motivational assembly that's fronted by Benson's Grandville-based the Conquerors International Strength Team.

Other strength demonstrations included Yago "Batman" Williams successfully snapping a baseball bat in two and blowing into a hot water bottle to the point of it bursting. Benson bent a 12-inch frying pan into the shape of a burrito while giving a horseshoe an entirely different look.

Mutual respect is the goal

The strongmen antics are intended to hold students' attention so they willingly listen to a positive message of successfully reach their goals, taking a stand against bullies by treating others with respect and learning how to harbor a safe environment at school.

Mike Benson bends the steel rod where it wants it.Benson's message is bolstered by officers from the Kentwood Police and Kent County Sherriff's departments who tell the boys and girls they are there to protect and help them when needed. The students are encouraged to approach any uniformed officer whenever they feel the need.

"Challenges are opportunities for us to learn and grow," Benson tells the students. "It's important to say something kind to someone you don't know or who's different than you in the halls or cafeteria. Find someone and say something nice that's going to encourage students and make them feel good."

Benson is the captain and CEO of the Grandville-based the Conquerors, a nondenominational, parachurch ministry with accountability and covering from Grandville-based Resurrection Life Church.
The Conquerors travel abroad and throughout the United States to provide non-religious inspirational messages to school assemblies as well as evangelistic outreaches hosted by churches or a ministerial association at neutral venues such as an auditorium or gymnasium.

Yago “Batman” Williams demonstrates how to make a hot water bottle explode.Benson's nine member team use feats of strength not only as a sure-fire way to hold their audiences' attention but to illustrate their intended messages.

"Strength is a universal language," Benson said a few days before the assembly at Discovery Elementary. "It's cross cultural. It's not a niche like some things like break dancing that's good in some aspects of the community but it doesn't have broad appeal. We transform communities worldwide with the gospel."

The Conquerors was founded in the early 1990s by bodybuilder James deMelo, who left the ministry in 2005 to pursue other ministry opportunities. Benson, who is also an on-board evangelist at the Grandville Resurrection Life Church, then became the ministry's captain and CEO.

So far, the Conquerors have been to 36 countries since its inception including a recent jaunt to Australia.

Run in with the law

Benson himself developed an early interest in bodybuilding thanks in part to watching Arnold Schwarzenegger's Conan movies. He purchased water weights when he was nine and was 12 when he bought his first set of real weights, a dumbbell and bar bell.

Yago Williams cracks the bat.Later on, Benson's life got sidetracked with the law, most notably when he was 16 years old when he and an accomplice robbed a bank in Alto, Michigan with a .22 rifle. Their take was $2,500.

"We were high on cocaine and drunk and messed up kids," recalled Benson. "I just didn't have a purpose. I really believe Satan was trying to take me out, trying to get me to destroy myself."

Benson was arrested and convicted, serving five years of a 20-year prison sentence at Ionia and Carson City. Life as an inmate was a learning experience for him.

"The first two years (in prison) I got in fights that result in assault tickets on staff," recalled Benson. "I spent some time in the hole and then it dawned on me if I wanted to get out I had to change otherwise I would do the whole 20 and I didn't want to do the whole 20."

But he tussle with the law didn't end.

"I tried to walk the straight and narrow for awhile but I got back into drugs and crime and then I got hooked up with the same guy I robbed a bank with in Alto and started selling drugs making quite a bit of money and living the party lifestyle," said Benson.

Later on, Benson went on a crime spree, robbing a bar in Belding, Michigan after tying up a barmaid and stealing her car, then fleeing to Indiana and robbing a Shell gas station that just happened to be across the from Boone County Jail and the Boone County Sherriff's Department in Indiana.

Then Benson fled to Florida by himself where he was arrested and eventually convicted while still on parole for the first crime he committed when an older, more experienced officer got a complaint Benson was selling a cleaning product door-to-door in a neighborhood with a no-soliciting policy. 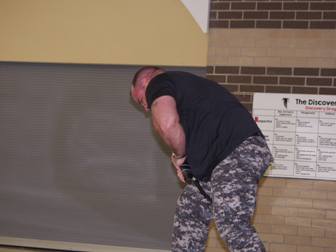 Mike Benson bends a frying pan into the shape of a burrito. Benson was placed in the back of the police car without handcuffs. And eventually the officer placed his car in drive and informed Benson something in the cop's gut told him Benson was lying about his identity.

He was taking Benson to the police station to run a print check. Benson knew that would lead to his arrest.

That meant his previous felon could turn into a 20-year sentence.

"They ended up taking me back to Indiana which I think was God setting me up. It was a jail unlike any other jail. It had a 240-man capacity and had only 40 inmates there. I had a four-man cell to myself. They gave me a cell with a window view of the gas station I robbed. Poetic justice."

Benson was 24 years old at the time.

Out of the ordinary inmates

It was there Benson met other inmates and volunteers who ministered to inmates who seemed out of the ordinary to him.

A war raged within him.

"In my mind's estimation, I was gong to spend the rest of my life in prison," he said. "I took all my anger and frustration out on God: 'If you're so good and have a great plan for my life, how come I'm so messed up? And the Holy Spirit said just call on me, son. The Lord penetrated my heart for the first time I was on my knees confessing everything from putting the cat in the dryer when I was six and pushing my sister down the stairs when I was four. I thought I had to confess all my sins."

Benson accepted the Lord and the anointing and power of God in 1996.

He served two years of a six-year sentence in Indiana and was then transferred to a prison in Jackson, Michigan where he became part of the chaplain's team and later moved to a prison in Ionia. But before transferring to Ionia, he heard the testimony of a former member of the mob, Rocco Morelli who shared his testimony.

Morelli's talk made a huge impression on Benson: If God could use him, certainly He could use Benson as well.

Benson preached his first sermon at the Jackson State Prison.

"It was then I realized God could use me and I surrendered my life to the call and started preaching the gospel," said Benson.

He was later transferred to a prison in Ionia and that's where something unexpected happened during a service.

Benson never encountered the man again. What he does know is his prophecy was spot-on.

"Eight months later I got married to Stefanie and then in 2004 I joined the Conquerors International Strength Team and in 2005 got licensed to be a minister of the Gospel through Resurrection Life Church."

Benson first learned of the Conquerors through Resurrection Life's men's group where he met the ministry's founder. Resurrection Life is connected with LINC (Linked International Network of Churches), an association of churches and ministries.

Most members of the Conquerors hold full-time jobs, "but we are going to bring a guy fulltime on in January 2017," said Benson. "And we're actually taking over Rez Life's prison ministry. They're putting that ministry under our covering and I'll have him (the new hire) head that up."

Becoming a Conqueror is no cakewalk. It's a yearlong program that psychology and physically pushes would-be Conquerors to their limits.

"We tell them we're looking for them to fail," said Benson. "We're looking for the weakness and we want to see how they handle failure. Everybody handles success really good but failure is a different story. We want to make sure their character matches their muscles."

Of all the feats of strength the Conquerors are known for, bursting a hot water bottle is the most dangerous, said Benson.

"A hot water bottle is 50 PSI, the same as truck tire," said Benson, who wrote an autobiography titled, "Mike Benson More Than a Conqueror: Conquering Your Past."

"If don't keep it from coming back, that pressure will go in your lungs or when it explodes, it's like world's largest rubber band and it's tremendous pressure on neck and back," said Benson. "I've had a lot of tough guys who ran off the team because of the hot water bottle."

But in the end, feats of strength pave the way for fulfilling the Conquerors' mission: Transforming communities worldwide with the Gospel of Jesus Christ.

Author Information
Author: Paul R. KopenkoskeyWebsite:
About:
Paul R. Kopenkoskey is a full-time freelance writer and editor for an assortment of publications including Grand Rapids Magazine, Grand Rapids Business Journal, and Faith Grand Rapids magazine. He has completed his first novel with the working title, Karl Beguiled. He and his wife, Barb, live in Wyoming, Michigan. They have three children and five grandchildren.