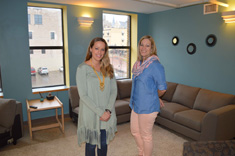 Besides providing an overnight refuge for a maximum of six young men for a 21-day stay, YES's separate space provides immediate basic needs including meals, access to a bathroom and shower, clean clothing, a designated sleeping room and a living room style community area.

Adrienne Goodstal stands in YES’s sleeping space. They are then connected to agencies that have the resources to provide young men with specific services to help them move forward with securing permanent housing and employment.

New to the street

"The data shows there are 200 homeless youth any night in Grand Rapids and it could be higher," said Goodstal. "Many youth are in bad home situations, and some are abusive. They're new to being on the street and encountering guys who've been on the streets for years. It can be quite intimidating.

The YES ministry is a respite from the hand-wringing existence homelessness creates.

It was developed in response to a gap in community emergency shelter space that is offered for young males.

Every aspect of the YES Shelter was driven by specific feedback from the youth male population and their unique needs, said Goodstal.

Mel Trotter staff learned many young males in the community are fleeing unstable living environments and don't always feel comfortable staying in Mel Trotter's shelter with an older male population, and therefore end up in unsafe places at night.

"They feel like it's a place to go and get a good night sleep and not have to worry about where they're going to stay," said Goodstal.

"Mel Trotter has an ongoing commitment to combine strengths, share resources and to work closely with other organizations to produce a greater impact on underserved populations," said Dennis Van Kampen, Mel Trotters' director and CEO. "By providing emergency shelter to young men during a traumatic season in their lives, we are able to continue fulfilling our vision to end homelessness one life at a time."

http://www.meltrotter.org
Author Information
Author: Paul R. KopenkoskeyWebsite:
About:
Paul R. Kopenkoskey is a full-time freelance writer and editor for an assortment of publications including Grand Rapids Magazine, Grand Rapids Business Journal, and Faith Grand Rapids magazine. He has completed his first novel with the working title, Karl Beguiled. He and his wife, Barb, live in Wyoming, Michigan. They have three children and five grandchildren.